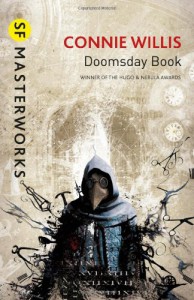 "Sleaponpon donu paw daton", the young woman said, and she had to be saying `Rest,´ or `Go to sleep,´ but she still couldn´t decipher it. The interpreter´s broken, she tought, and the litlle knot of panic started to form again, worse than the pain in her chest.

It can´t be broken, she told herself. It´s not a machine. It´s a chemical syntax and memory enhancer. It can´t be broken. It could only work with words in its memory, though, and obviously Mr Latimer´s Middle English was useless. Whan that Aprille with his shoures sote. Mr Latimer´s pronounciations were so far off the interpreter couldn´t recognise what is was hearing as the same words, but that didn´t mean it was broken. It only meant it had to collect new data, and the few sentences it had heard so far weren´t enough.

This reminds me of the universal translator in Star Trek. I think those were actual machines, though.

I really appreciate that Willis adresses the difference of language between the two time periods this story is set in and that not everything works out as planned. Tbh, so far nothing has gone according to the plan.